Written by John Alexander
Updated over a week ago

For the latest updates, go to

This article is no longer updated.

Hey...it's been a while.  We didn't forget about you, we just got busy with other stuff.  We've hired more people, released new features, went to a lot of trade shows, our designer tripped on a rug and dislocated his knee, and so on.

But we have a nice update for you that we hope you'll enjoy.  And don't worry, we won't let it go so long between updates again.

Changes:
• Added pinch and zoom for pinching and zooming
• NEW UI for following a Showcaller
• NEW UI for notifying you when a Showcaller starts broadcasting their position
• Moved item run time to the new bottom tracking pane
• Improved experience when tracking through large shows
• Added pull to refresh in the cue sheet
• Squashed lots of bugs
• Fixed lots of crashes
• Performance improvements

An all new dashboard redesign making navigation between teams, events and shows much easier. Included in this are some great new features as well: 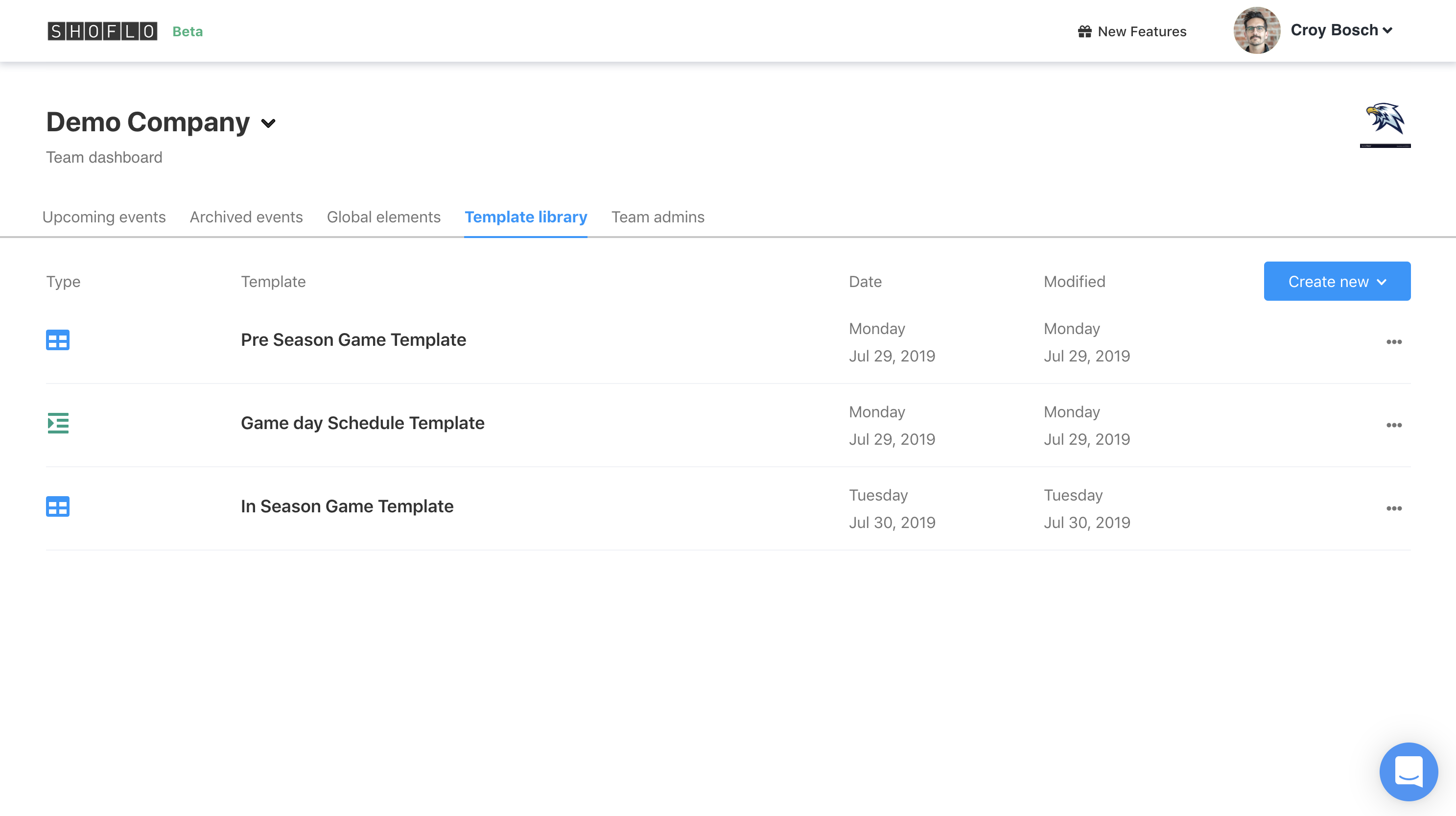 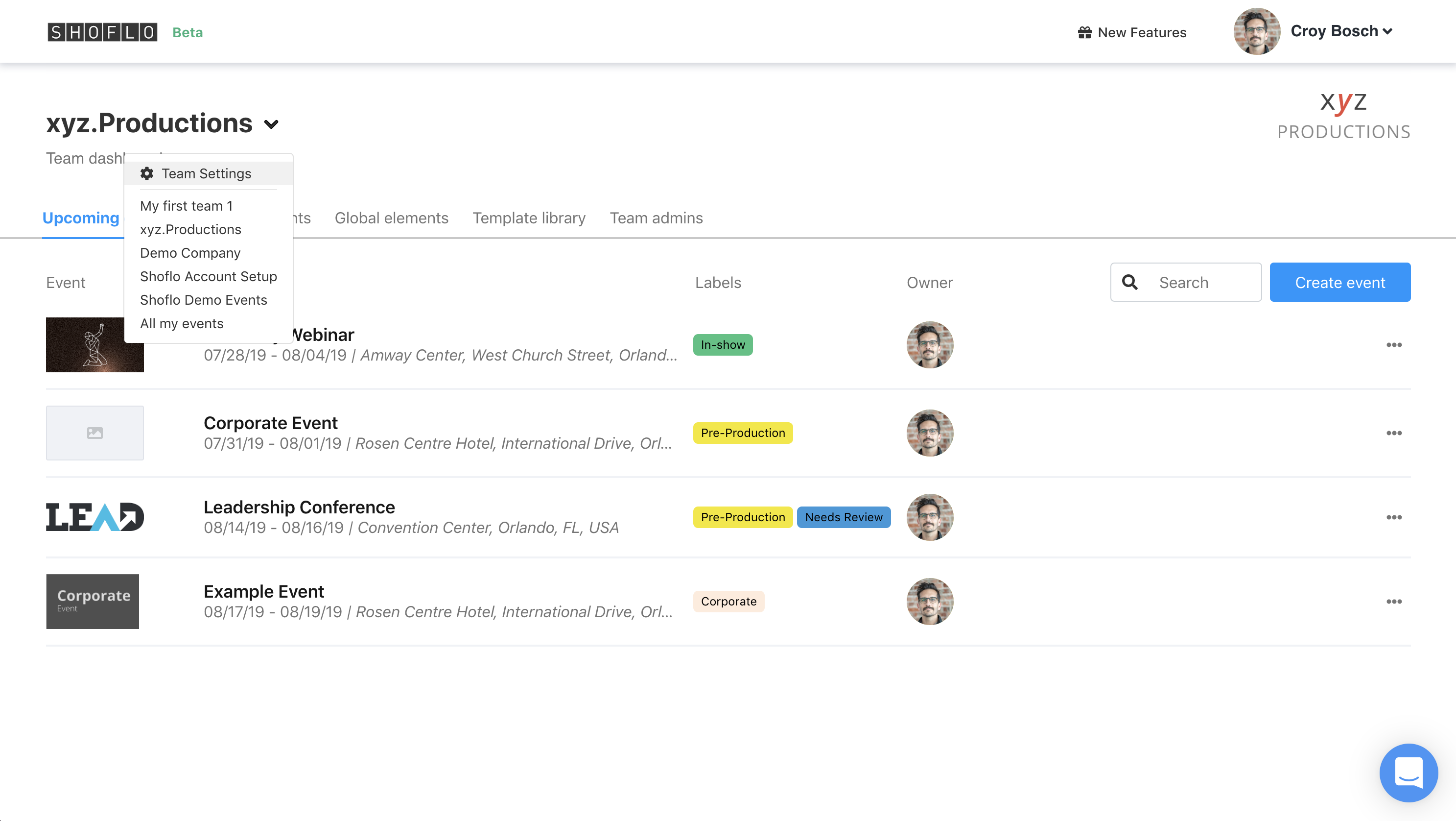 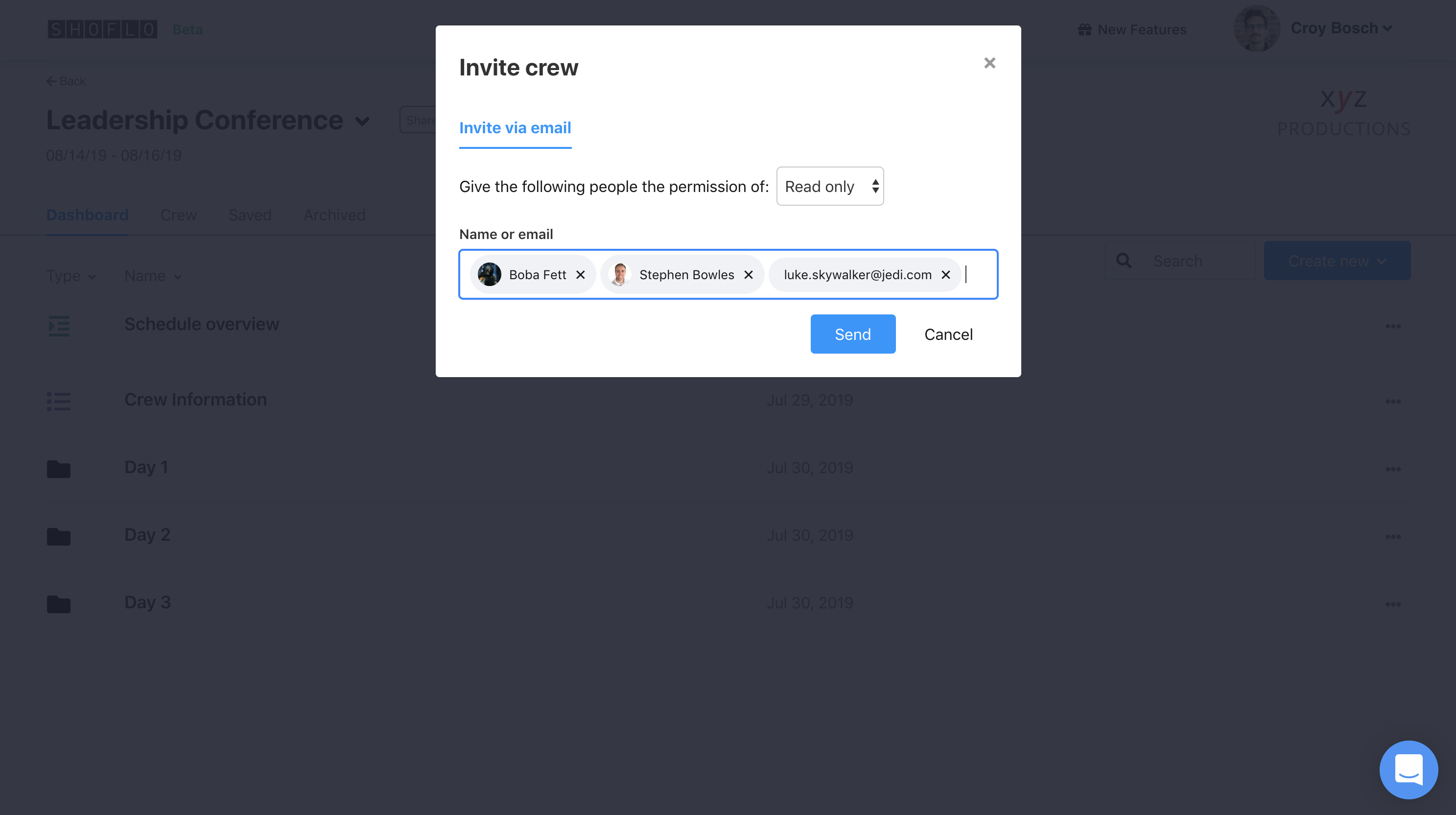 Very excited to roll out our new PDF export feature which includes a lot of new functionality to continue to help your important printing needs on site. Here is a list of some new functionality for a an in depth over view - learn more 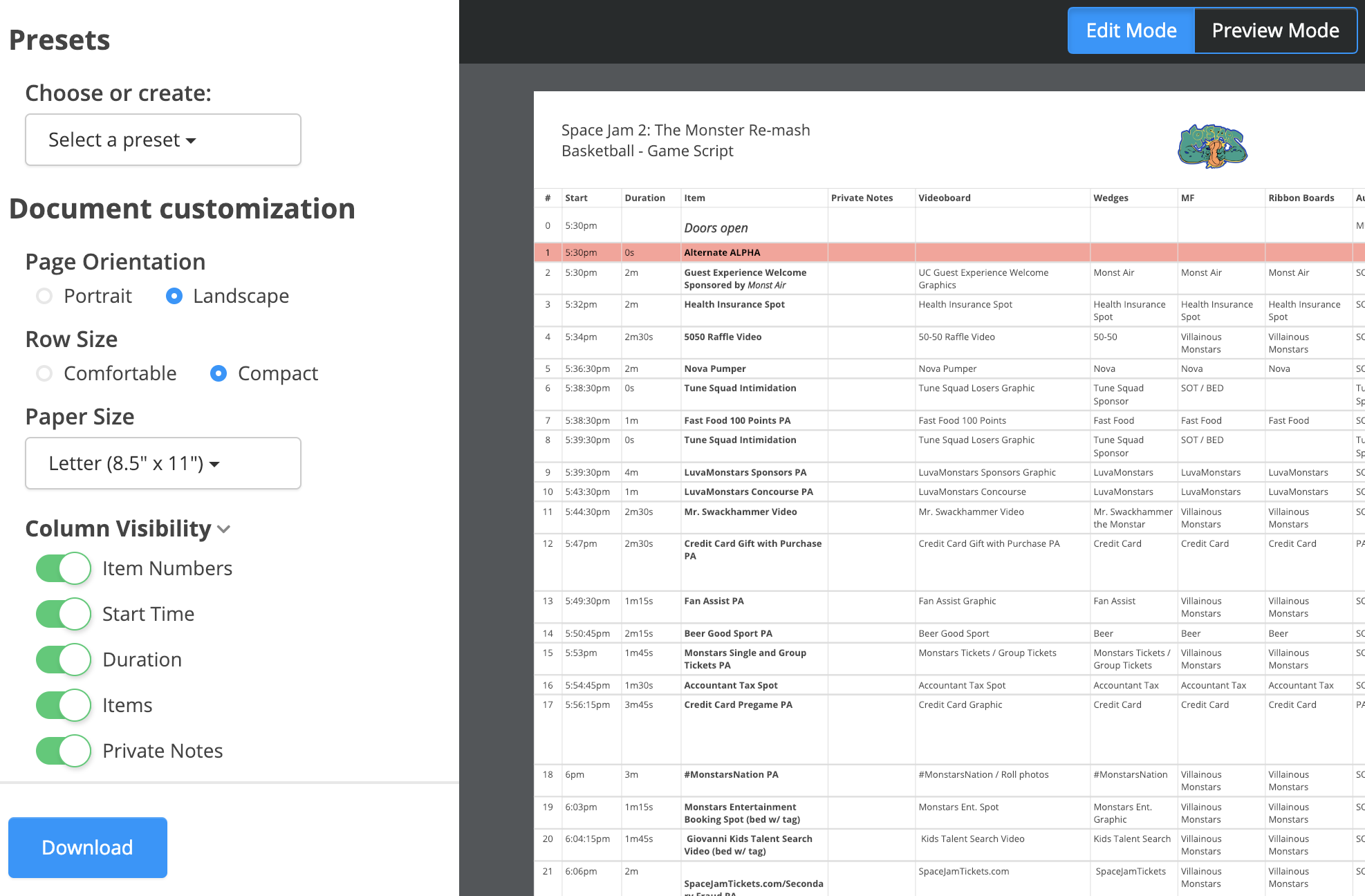 After a lot of feedback from you all we've made some significant updates to the Global Element Manager (GEM) Learn More
Some highlights:

Display View (learn more)
Is designed to be sent to an external monitor in a video wall, presenter lounge, or well anywhere! Pick a show caller to follow & one department column. This view will help crew or talent see in real time where you are at in Show from a larger distance as the font sizes are much larger than standard grid view. 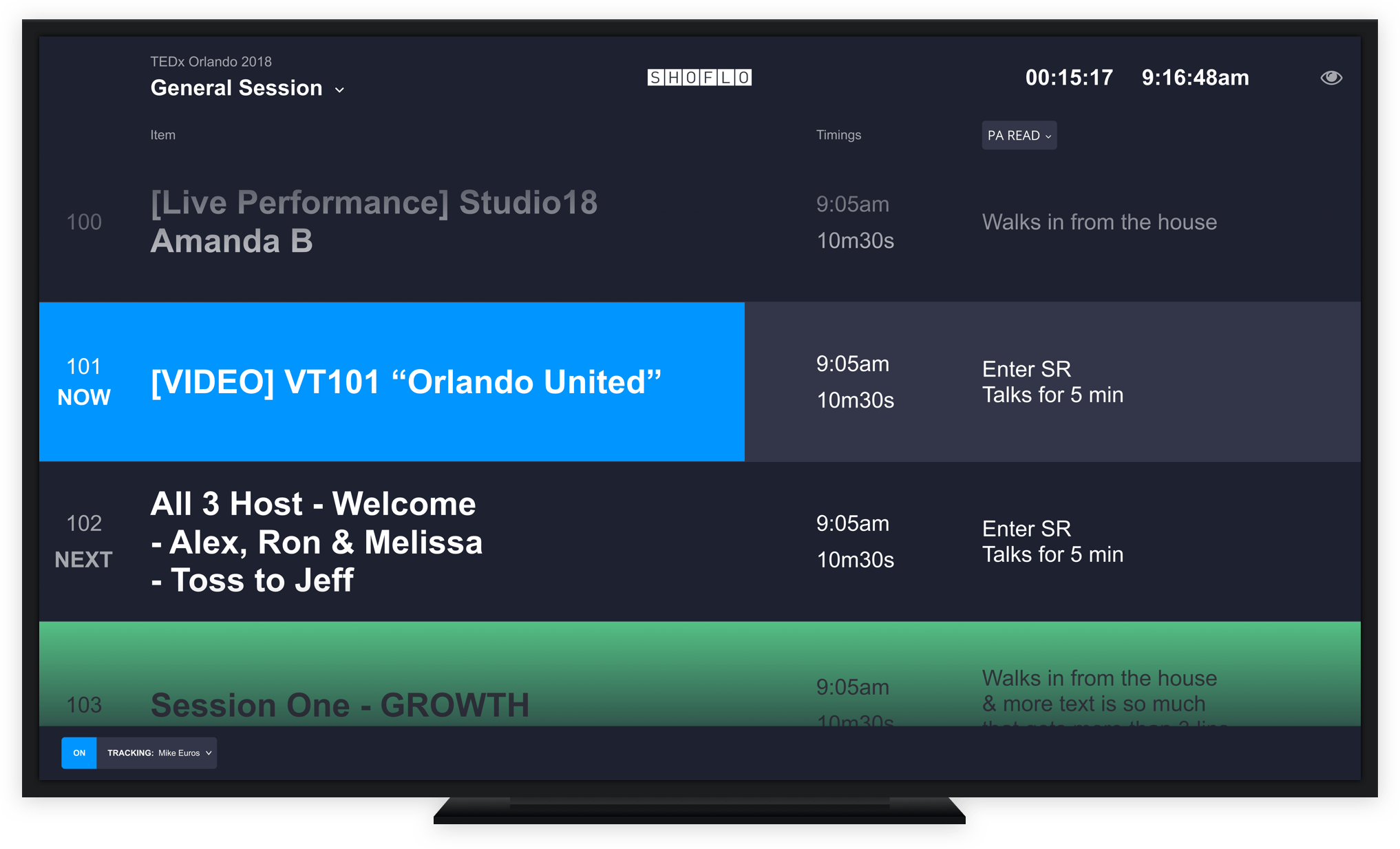 #4173 - Updated PDF exports so timing columns will no longer be before the item column
#4365 - Fix for annoying scroll bars in Prompter & Display View
#4603 - Fix for scenario in PDF Export (beta) where multiple users exporting at the same time could overwrite each other's export settings
#4679 - Tracking a row as a show caller will now auto select the item cell of the newly tracked row
#4680 - Updated cell tabbing so that when the user reaches the end of a column, it will no longer tab to the next row.  Instead it will end at the last cell in that row
#4687 - Added timestamp to bottom of PDF Export (beta) exports
#4701 - Fix for scenario where side panes in Prompter View would close even if the user was hovered over them
#4709 - Fix for overlapping profile name in the side nav
#4720 - Fix for column widths not being exported properly

• Added support for the new reverse start & preset timing that we recently released in the web app. This allows you to have the start & preset times in your show calculate in reverse.
• All new users to the app will see our onboarding flow (existing users can see this by opening the side nav and tapping on "Onboarding").
• Adjusted the positioning of the row & cell edit icons to be center aligned. This should help with reaching the icons on larger devices with your thumb.
• Various styling improvements & enhancements.
• Fix for a rare crash that could occur when navigating from a show to the event dashboard after opening the iOS notifications.

#2914 - Fix for some user profile images having an incorrect aspect ratio
#3494 - Improved drag & drop performance inside the Global Element insert modal
#3516 - Improved performance and messaging when duplicating events
#3665 - Updated terminology for preset type & duration type to be more consistent
#3669 - Fix for the duplicate event modal’s date pickers being cut off at the top of the screen
#3679 - Updated the cut/copy behavior to not persist when entering edit mode (your selection state on a copied/cut cell will go away when you enter edit mode).  Also removed the ability to bulk cut & paste cells.
#3698 - Added activity events when inserting & updating global elements in a show
#3714 - Fix for being unable to insert Global Element’s above the first row in the insert modal
#3732 - Fix for CSV Import failing when uploading an unsupported file type
#3739 - Fix for advanced export wizard not showing hidden columns
#3742 - Updated styling on selected item cells while the tracking bar is present
#3746 - Fix for in normal view, start times & item titles were not aligning left for contributors & read only
#3747 - Fix for an error generated when updating certain show settings
#3748 - Fix for preset time in normal view being incorrectly positioned
#3749 - Fix for switching item numbers from manual to auto not being real time for all users
#3753 - Fix for being unable to re-send pending team admin invites
#3755 - Updated styling on the “X” button on the top on boarding toolbar
#3779 - Added ability to select the Global Element Manager when publishing Global Element changes
#3795 - Added Global Element keyboard shortcut tips to row edit menus
#3805 - Fix for when making text only edits, activity feed was not tracking formatting changes in title or description cells
#3824 - Removed “BETA” tags for Global Elements
#3831 - Fix for submit button for CSV Import being shown before all columns were mapped/skipped
#3876 - Fix for private notes not being exported properly in the Advanced Export

• Added basic support for certain Global Elements actions.  This includes support for when Global Elements are inserted, deleted, and updated in the web app.
• Added in the same background color for the private notes column that you know and love from the web app.
• Added in a new background behind the row edit icons.
• When a deleted row is restored in the web app, it'll now restore in real time to the iOS app.
• Removed the default "Item" placeholder text when entering edit mode of an empty item title.
• Fixes a crash around trying to preview files uploaded to the root directory.
• Fixes an issue around not being able to see all of your events on the user dashboard.
• Fixes incorrect status bar scaling on plus sized devices.
• Fixes a rare crash that occurred on load of certain shows.

Greetings Shoflo'ers!  Valentines Day is right around the corner, so team Shoflo is shooting an arrow of love to the newest version of our iOS app!  Here's whats in this box of chocolates:

Did this answer your question?